It is easy enough to read and write about the research that has been done on medicinal mushrooms, but what is one supposed to do with this new found knowledge? What if you don’t have time to make a dual extract, or it feels too hot out to drink a hot mushroom tea. There are many ways to include mushrooms into daily life that do not involve imbibing a tea or taking a tincture. As it is now Fall and the weather will start to get colder, people are more susceptible to viruses. A person who uses mushrooms throughout their days will be more resilient during these cooler and darker months, and really, the whole year. The medicinal polypore mushrooms that I usually write about are deemed ‘inedible’ in most ID books. To an extent, this is true, in that you are not going to fry them up and eat them like a Shitake or Matsutake, but there are definitely ways to consume them, and benefit from their medicinal qualities. This is the first recipe I’ll be posting, but stay tuned for more throughout the next few months. 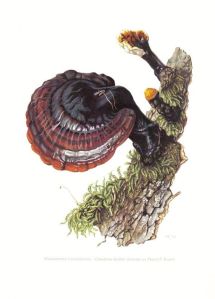 1 Tbs maple syrup, honey, or mushroom infused honey! (made by chopping up polypore mushroom into the smallest pieces possible, filling up a jar half way, pouring raw honey over the mushrooms, and letting sit for 1 month or more)

*Mushroom decoction: 1 Handful chopped mushrooms placed in pot or crockpot. Pour 4 cups of water over mushrooms, and simmer until the brew is decocted by half…this means that there will now be 2 cups left. You can test this by using a chopstick – Mark the chopstick where the water begins, and then dip the chopstick in intermittently to see when the brew hits half – Strain out the mushrooms and either drink the decoction as tea, or place in fridge for use in smoothies, oatmeal, broths, porridge, rice, beans, and stews.

A note on beta-glucans and the Immune System

Beta Glucans are polysaccharides (carbohydrates) found in the cell walls of Yeast, Fungi, Algae, Lichens, and some plants, such as Oats and Barley. Together, with Chitin, they make up the fungal cell wall. B-glucans are biological response modifiers. This means that they cause no harm and place no additional stress on the body while helping the body to adapt to certain biological and environmental stressors. They support major systems such as the nervous, hormonal and immune system. You may have heard of adaptogens, this is a very similar definition.

Research shows that Beta-glucans have a hypoglycemic, cholesterol lowering, immune-stimulating and immune-modulating, and anti-tumor effect on animals. 1,2,4

Beta-glucans are made up of hemicellulose, which is a soluble fiber. Soluble fiber is water-soluble and forms a viscous water layer in the gut. This viscous layer in the small intestine decreases absorption of sugars and lipids into the blood stream. (hence, the hypoglycemic and hypocholesterolemic effect). Beta glucans from fungi reduced overall level of cholesterol and LDL in blood, as well as decreased the level of free fatty acids, while at the same time increasing HDL cholesterol. The sugars also increase the amount of Leptin – a protein like substance produced by fat cells that plays a role in hunger and satiety, which suggests their use as an agent to help with weight loss.

Beta-glucans are resistant to stomach acid and so they move through the GI, into the small intestines pretty much unchanged. The cells in the lining of the small intestine, the enterocytes, facilitate the transportation of the Beta-glucans into the lymph where the macrophages are waiting with open arms (Dectin-1 receptor sites). Like a key, they unlock the macrophages and activate them to travel back to the lymph nodes to induce immune activations. Once activated, it starts to produce bactericidal compounds such as reactive oxygen radical, N-oxide, and lysozyme. These activated cells also produce cytokines, which then activate phagocytes and leukocytes in specific immunity. B-glucans also play a role in promoting the activity of helper lymphocytes known as Th1 and Th2. Th1 controls immunity against intracellular parasites, while Th2 controls immunity against extracellular pathogens. When there is an imbalance in these lymphocytes, an autoimmune response can occur. Beta glucans help keep this balance.

Antitumor action: The antitumor action happens via activation of the immune response, explained earlier. They do not attack cancer cells directly, but produce their antitumor effects by activating different immune responses in the host. They potentiate the response of precursor T cells and macrophages to cytokines produced by lymphocytes after specific recognition of tumor cells. In summary, the tumor cells are attacked by the immune system, which is activated by macrophages bound with Beta glucans.

3 thoughts on “Including Mushrooms in your Daily Life: Recipe 1”