“side of the body” and “resembling oyster”

I am apt to write about the polypores – the often overlooked wizened and ancient ‘conks’ of the forest –  that require more time to age, to collect, to process. I am stepping back and writing about the medicine of the familiar gilled Oyster Mushroom. They are as common in the forest as in the grocery store, and what better medicine to write about than medicine that is so accessible that the forest dwellers as well as the grocery store goers may benefit.

The fruiting Oysters will be found on hardwoods mostly – the Cottonwoods, Oaks and Alder – fruiting from their carnivorous mycelia in the spring. The carnivory is real – watch the mycelia digest a nematode in this video 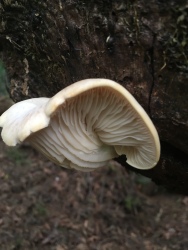 Energy value of this mushroom was about 297.5 kcal/100 g dry weight

There are many factors that aggregate and result in atherosclerosis. These include and are not limited to hypertension, hyperglycemia, hypercholesterolemia and lipid peroxidation. Oyster mushroom research has demonstrated protection against all of those factors. In an animal study, rats were administered chrysin-rich Pleurotus extract. After administration there was a significant decrease in mean blood serum levels of glucose, lipid profile parameters, and hepatic marker enzymes and a simultaneous increase in enzymatic and nonenzymatic antioxidant parameters.2

Advantageous respiratory effects of pleuran were also observed in adult athletes. A study included 50 athletes treated with pleuran over a three month period of time and found a significant reduction in the frequency of upper respiratory tract infections as compared to athletes treated with placebo. Blood samples of the athletes showed significantly higher levels of circulating NK cells in the pleuran group as compared to the placebo group.8

20 subjects were randomized to take either one portion of soup containing 30g dried oyster mushrooms or a tomato soup (placebo) on a daily basis for 21 days. Standardized blood concentrations of lipid parameters and oxidized LDLs were measured at baseline and after 21 days. Treatment with Oyster mushroom soup decreased both triacylglycerol and oxidized low density lipoprotein levels significantly, and showed a significant tendency towards lowering total cholesterol values. 9

Boiling pot: boil for 1.5 hours, strain mushroom from decoction, dispose of mushrooms, put aqueous extract back on heat and reduce liquid down to 120mL

Once you have 120mL of mushroom aqueous extract, stir in 120mL of raw honey

Store in jar and refrigerate

Pleurotus ostreatus is about 50% Polysaccharide, and the best way to extract these polysaccharides is through a boiling process. We have 30g of dried Pleurotus ostreatus and for a child who weighs 27kg, we would dose them with 270mg Pleuran, and so about 540mg dried oyster mushroom, or .5g. We want there to be .5g in 1 tsp (4mL) of extract. Since we will add 1part honey to 1part mushroom decoction, we will want the decoction to be a 1:4 and the final product to be a 1:8.

One thought on “Oyster Mushroom”